South Florida has taken on the reputation of the drug rehab capital of the United States. Many people travel to go to rehab in South Florida for the beautiful scenery, tranquil environment, and influx of readily available recovery resources. While it is a wonderful place to go for drug rehab, recent years have demonstrated alarming rates of fentanyl overdoses in South Florida cities.

Fentanyl is a powerful opioid that has risen in popularity during the nation’s opioid epidemic. In fact, fentanyl is so widespread, that many people get heroin that is mixed with fentanyl without even knowing it. Drug manufacturers and dealers cut other opioids with fentanyl to create a cheaper, more potent substance. Then, users are unable to know exactly what they are getting. Unfortunately, fentanyl is responsible for many fatal drug overdoses and is wreaking havoc on South Florida communities.

Fentanyl is a powerful synthetic opioid that is used in medical settings to treat severe pain. Although it is similar in structure to morphine, it is 50 to 100 times more potent. The prescription drug is commonly used for pain management treatment in cancer patients and is applied through a patch on the skin. Although it is a schedule II prescription drug, it is found abundantly on the streets.[1]

Many drug dealers add fentanyl to heroin to make it cheaper and more potent, while others disguise fentanyl as highly potent heroin. As a result, many opioid users don’t know what they are really buying or how strong the drugs they are buying really are. Fentanyl usually appears in a white powder form and can be smoked, snorted, or injected. 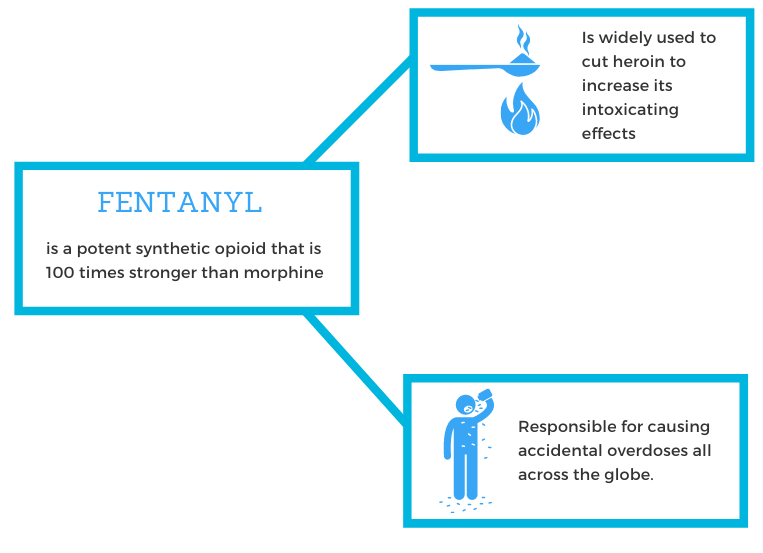 Fentanyl causes a short-term but intense high. The high is characterized by extreme euphoria, slowed respiration, and reduced blood pressure. These symptoms are often accompanied by restricted pupils, flushing of the skin, drowsiness, and lack of coordination. The drug is so powerful that people don’t have to take a lot of it to overdose. Instead, small amounts of fentanyl can cause fainting, seizures, and death.[2]

Fentanyl abuse, especially in powdered form, can result in overdose and accidental death with just one dose. Signs and symptoms of fentanyl overdose mimic those of a heroin overdose, including signs like:

If a fentanyl overdose is tended to in a timely manner, it can be reversed with the life-saving drug, Naloxone. Naloxone is an opiate antagonist that knocks opiates off of the brain’s receptors.[3] As a result, a person’s breathing can be temporarily restored until they receive medical attention. However, due to the potency of fentanyl, multiple doses of Naloxone may be required to revive an unresponsive person. Unfortunately, in some cases, Naloxone is ineffective against fentanyl overdose.

In 2018, fentanyl was the leading cause of drug-related deaths in Florida. Deaths due to fentanyl rose by 35% between 2017 and 2018. The Palm Beach Post reports that 278 people in Palm Beach County died from a fentanyl overdose in 2018. Overall, 2,348 people in the state of Florida died because of the drug.[5]

Many people in the South Florida recovery community have lost family, friends, or acquaintances to a fentanyl overdose. Despite the tragic truth of fentanyl, many people still suffer from opioid addiction – and there is no way to know exactly what you are getting when you buy a powdered substance. As a drug rehab in Palm Beach County, the issue of overdose deaths hits home.

Opioid addiction of any kind can be fatal, however, when fentanyl is involved, the risk of overdose increases dramatically. Most people who suffer from opioid addiction require professional treatment from a comprehensive drug rehab program.