Why Do People Abuse Vyvanse? According to the Center for Disease Control, between 1997 to 2020, the number of people diagnosed with Attention Deficit Hyper Activity Disorder (ADHD) has slowly increased year after year. In 1997 less than 6% of people ages 3-17 had a clinical doctor making a diagnosis, and by 2020 approximately the number had almost doubled to 10%.[1]

This increase does not mean that the disease is becoming more prevalent in the community. It is quite possible that we are just gaining the ability to recognize it. Because of medical advances in recent years, a significant shift has taken place allowing those in the medical profession to notice and pass along the information accurately to doctors allowing them to recognize the symptoms and begin treatment sooner. And, in this case, treatment normally starts with medication.

This means Lisdexamfetamine must be broken down into dextroamphetamine to become active in the body. This is the chemical that creates both pleasant and therapeutic effects. Prodrugs must undergo this breakdown process, otherwise, they are inactive.

Chemists formulated this drug because they believed delaying the onset of effects would provide the patient with a steady dose of the drug that lasted longer. Their goal was to make it last throughout the day, providing lasting relief for people with ADHD.

Another benefit of this prodrug is that researchers thought it would reduce the potential for abuse. This is because there would be no immediate flood of medication in the brain.

Why is Vyvanse Prescribed?

The main reason stimulant medications like Vyvanse are still prescribed is because researchers have found that people suffering from ADHD saw massive improvements in their symptoms. Vyvanse is shown to help subjects’ ability to pay attention, stay on task and focused, and lessen their tendency to fidget.

While medications play an important role in ADHD treatment, they do not guarantee a full recovery. Medication is only a part of a total treatment plan. Usually, people with the best outcomes have treatment that includes psychological, social, and other forms of treatments.

The Culture of Illicit Vyvanse Abuse

In today’s fast-paced society, along with the high expectations of people, it is no wonder that the idea of something to keep people going, giving them that much more energy, would be highly sought after. Stimulants can also affect sleeping, eating, and talking habits.

According to a paper, Academic Performance Enhancement: A Qualitative Study of the Perceptions and Habits of Prescription Stimulant–Using College Students, published in October 2011 in the Journal of College Student Development through Johns Hopkins University Press, the use of stimulants amongst college attendees has become a normalized part of campus life.[4]

If you were to go to any college campus before and during finals week and ask what their plan was for the next few days so they could cram, many students would say stimulants are in their toolbox.

Clinical trials demonstrate that the most common effect of Vyvanse in healthy adults is improvements in cognition, such as enhanced working memory, long-term episodic memory, and some aspects of focused attention. These effects can be extremely appealing to students, athletes, businessmen and women, and more.

Despite chemists’ best efforts, Vyvanse remains addictive and is a Schedule II narcotic according to US drug laws, meaning that there is a high possibility for misuse and addiction.

Although drugs like Vyvanse and other stimulants can offer feelings of euphoria and increased focus, people often experience agitation and greater energy. There also is a strong possibility for Vyvanse to become addictive.

Some of the most common side effects of Vyvanse include:[5] 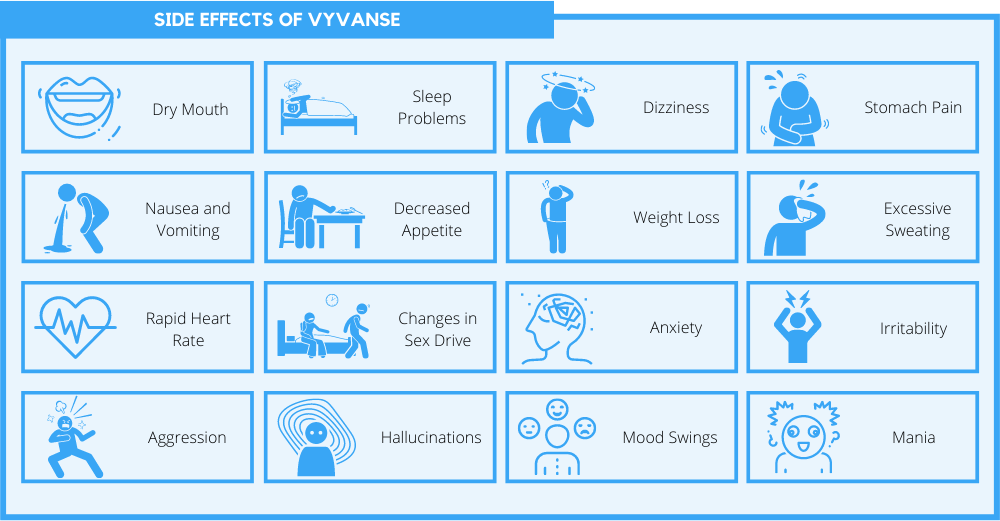 People who abuse Vyvanse may be more prone to these side effects.

Young adults are faced with fast-paced and stressful lives. Not only do they contend with the horrors of puberty and having to deal with the anxiety and terror that seems to be a part of the teenage condition, but they also face peer pressure to use drugs, especially stimulants like Vyvanse and Ritalin.

More people than ever are being treated for ADHD, so the availability of Vyvanse and other similar drugs has skyrocketed. This, along with the fairly innocent light people make of stimulants, can make for a seductively potent mix that can easily lead someone down the road of stimulant addiction.

Most drugs that are psychoactive carry the risk of forming an addiction. If you or someone you know has been abusing Vyvanse, don’t wait any longer. Contact us today to get help.