Veterans Struggling with PTSD and Addiction Many veterans face stress from deployment and difficult challenges such as injuries and illnesses. These struggles put Veterans at an increased risk for PTSD and addiction. It has been reported that approximately 2 of 10 Veterans with PTSD also have a co-occurring addiction. As soldiers return home and attempt to return to a state of normalcy, many of these heroes find it almost impossible to cope with anxiety, depression, and PTSD. Ultimately, many veterans often turn to drugs and alcohol to soothe these overwhelming emotions. 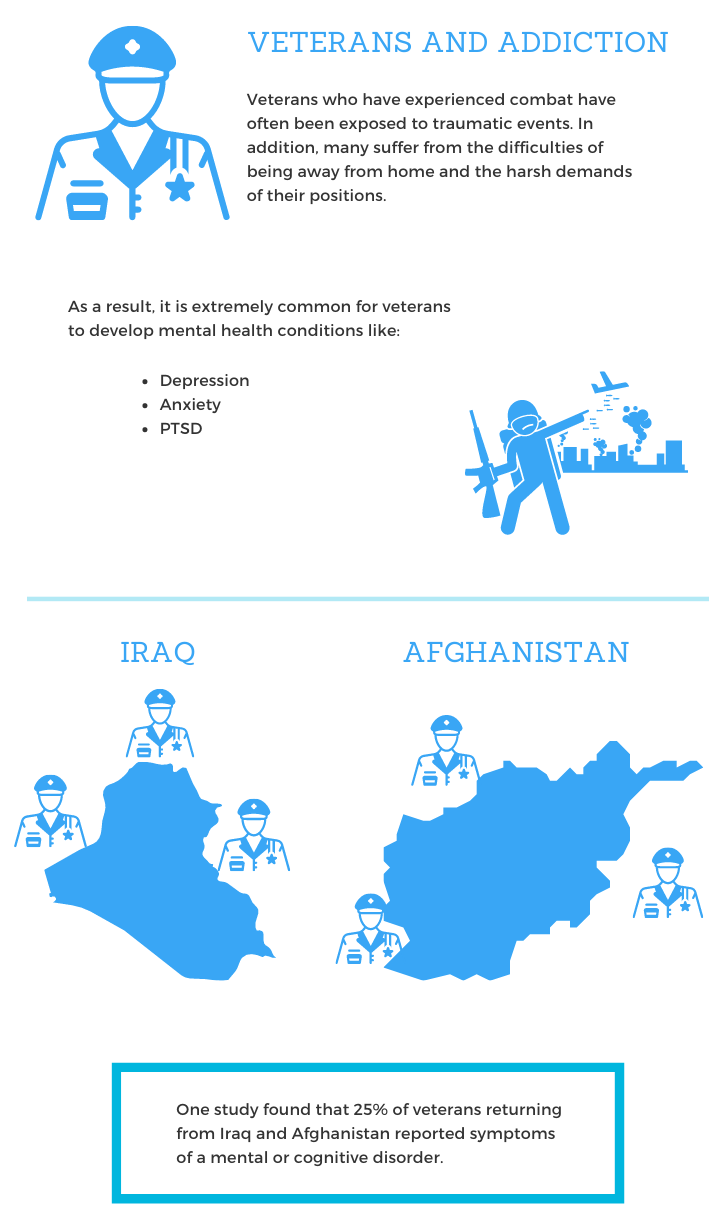 What is PTSD and why does it affect so many veterans?

PTSD (posttraumatic stress disorder) is defined as a mental health disorder that individuals often develop after experiencing or witnessing a life-threatening or horrifying event such as combat, natural disaster, car accident, natural disaster, an act of terrorism, or sexual assault. Common symptoms of PTSD often include:

PTSD is especially common among veterans, especially those involved in combat. The effects of experiencing traumatic events such as combat are disturbing and emotionally disruptive. Veterans often experience symptoms such as hypervigilance, nightmares, and flashbacks to the traumatic event. These symptoms often lead veterans to isolate and perpetuate feelings of hopelessness. If left untreated, PTSD often results in the individual turning to illicit substances.

Veterans with PTSD and Substance Use Disorder

According to the U.S. Department of Veteran Affairs, one of the highest risk groups for both PTSD and addiction is the veteran population. Almost one in three veterans seeking treatment for addiction have PTSD. Veterans often turn to alcohol and other drugs in order to cope. Often times, these coping mechanisms ultimately result in addiction. The relationship between PTSD and addiction is complex in nature, as one often exacerbates the other.

Many veterans do not seek professional treatment for their PTSD, ultimately resulting in the vicious cycle of suffering from a co-occurring disorder of addiction and PTSD. Some symptoms of PTSD include a surge of emotions, paranoia, and feelings of alienation. Drug and alcohol abuse often magnifies these symptoms, making these feelings far worse.

Substance Use Trends Among Veterans

Stress from the chaotic military lifestyle includes warzone and combat which often contributes to a spiking epidemic of mental health disorders and drug use. One study found that 11% of veterans seeking healthcare services from the U.S. Department of Veteran Affairs (VA) met the criteria for a substance use disorder. Here are a few substance use trends among veterans:

Alcohol consumption is a common pastime in the military. Service members are known to drink on various occasions – leisurely, socially, out of boredom, to celebrate and event, and even to promote unity within their battalion. Deployments and stressful combat exposure is often a common cause for growing alcohol abuse rates among members of the military. Veterans often use alcohol as a coping mechanism or a self-soothing technique in order to cope with traumatic events. Other veterans use alcohol to medicate underlying mental health issues. Alcohol abuse is common among active-duty service members, and excessive drinking habits tend to continue long after military service has ended.

The wide accessibility of prescription opioids and benzodiazepines poses a significant threat to veterans suffering from PTSD. The misuse of prescription opioid pain relievers and benzodiazepines has been on the rise among veterans for decades. Mental health treatment and pain management for veterans can be especially challenging. According to the VA, chronic pain plagues nearly 50% of veterans returning from war. Veterans diagnosed with PTSD are often prescribed benzodiazepines, in order to treat the paralyzing symptoms of this mental health disorder. The misuse of prescription medications can lead to an increased risk of dependence and addiction – especially for veterans suffering from PTSD.

During the Vietnam War, heroin and opium were commonly abused among active-duty service members. The horrifying war environment combined with the challenges associated with their military lives led many servicemen to abuse these drugs. Nearly 43% of Vietnam War veterans were reported to have used heroin and opium at lease once. Despite these staggering numbers, illicit drug use among active-duty servicemen has been on a decline since new policies required random drug testing.

Treatment for Veterans with Co-Occurring Disorders

In order for veterans with co-occurring disorders to achieve a sense of normalcy, it is vital that they attend a dual-diagnosis treatment center. Addiction can affect the lives of veterans as well as their loved ones and family members. An integrative approach to treating addiction with specific therapies such as medication-assisted treatment (MAT), cognitive behavioral therapy (CBT), trauma therapy, adventure therapy, and many other holistic approaches to treatment are often most effective for veterans.

When treating veterans suffering from PTSD and addiction, it is important that the dual diagnosis is treated simultaneously. Furthermore, a veteran-specific dual diagnosis treatment program can address not only the addiction but any other underlying mental health disorders as well. Ultimately, this will reduce the likelihood of our heroic veterans experiencing a relapse. Comprehensive Wellness Centers aims to improve the quality of life for all individuals struggling with substance use or mental health disorder. If you or your loved veteran is suffering from PTSD and addiction – call our team of addiction specialists today!